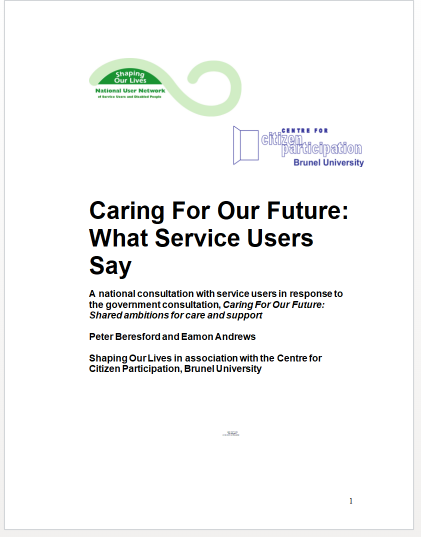 In the early 2010s, adult social care was at a time of major change and difficulty, with government, politicians and policymakers all recognising that the system as it existed was defective, inadequate and untenable. The Coalition government planned to publish a White Paper setting out proposals for reform in Spring 2012, and initiated a preliminary consultation in 2011 titled Caring For Our Future: Shared ambitions for care and support. This report was designed to feed into that consultation, bringing together a diverse range of adult social care service users to involve them in discussions about the future funding of social care – discussions they had not been adequately involved in before, even though they were the people most affected by these decisions. This report documented the concerns of those service users in the face of the government’s stated priorities, and made recommendations on how to better develop an adult social care system that involved service users at all levels of policy-making and management.
In partnership/with support of: Centre for Citizen Participation at Brunel University, Joseph Rowntree Foundation
Download report